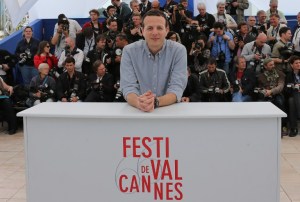 Mexican director Amat Escalante poses on May 16, 2013 during a photocall for his film “Heli” presented in Competition at the 66th edition of the Cannes Film Festival in Cannes. Cannes, one of the world’s top film festivals, opened on May 15 and will climax on May 26 with awards selected by a jury headed this year by Hollywood legend Steven Spielberg. AFP PHOTO / LOIC VENANCE